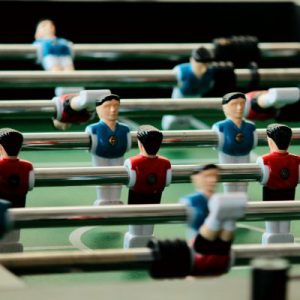 Recently I was chatting to an assortment of early career engineers.  They were comparing their workplace environments to the environments of friends who worked for marketing, software or technology companies.  There was a note of envy in their tone as they described companies that had table tennis tables in the office, a fireman’s pole, a helter-skelter slide, hammocks, and free snacks.  Whilst these facilities are expected in marketing and media organisations, surely they have no place in serious engineering organisations; discuss…

Engineering is a creative activity

When I ask engineers when they were last creative, many struggle to answer.  This is interesting because the Engineering Council in the UK explicitly writes creativity into the job description of engineers in its UKSPEC document[i].  Engineering should by rights involve creativity, – having original ideas that have value, and involve innovation, – the realisation of those ideas.  Looked at another way, problem solving usually involves stages of divergent thinking, followed by stages of convergent thinking.  Divergent thinking involves intuition, for example considering a range of different solution paths and options.  Convergent thinking involves logic, for example considering what needs doing, and in what order.  Engineers are very good at logic because it is hard-wired into our education.  We are less practiced at intuitive or divergent thinking, and this tends to stifle our creativity.

So, let’s return to the matter of our working environment.  There is plenty of evidence showing that intuitive thought processes and flashes of inspiration occur when people are relaxed, having fun, or doing something not connected with the task.  Companies who introduce facilities such as hammocks, football tables and slides recognise this fact.  However, installing a football table does not necessarily lead to a creative culture in your organisation, because organisational culture, like beauty, is more than skin-deep.  This concept is emphasised by Edgar Schein, from the Sloan Business School at MIT. He identifies three levels of organisational culture[ii].

He maintains that the true culture of an organisation resides at the level of basic assumptions rather than with any visible artefacts or stated values.  In addition, he points out the importance of consistency or alignment of the three levels.  In other words, if the basic assumptions in an organisation are at odds with the stated values or artefacts, this can lead to demotivation and cynicism.

Photo by Alex Sajan on Unsplash
This article first appeared in The Chemical Engineer on-line on 14th March 2018.